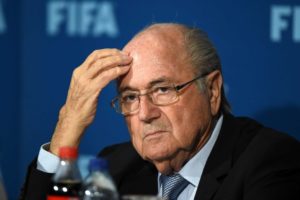 Sepp Blatter, current president of FIFA has had better days.

As everyone knows, FIFA (Fédération Internationale de Football Association) is corrupt and has had numerous scandals. Their shenanigans have been going on for decades, and I’ll now tell you about the time my father was involved in what nearly became an international incident due to FIFA rules and regulations.

In the 1960s, my father was the president of the Greater Los Angeles Soccer League, which was a group that oversaw a local league, and sponsored matches between international teams in the LA area. He has stories about being in the locker room at the LA Coliseum when Pele was playing a match locally with Santos FC of Brazil. With the way FIFA works, the Greater Los Angeles Soccer League was associated with the US Soccer Federation, which is a member of  CONCACAF (Confederation of North, Central American and Caribbean Association Football), which is a member of FIFA.

At some point in the 60s, a small Brazilian club from a lower division was in LA to play a match. The Greater Los Angeles Soccer League was a sponsor for their trip, meaning they guaranteed the hotel they were staying at that the club would pay their bill. There was a mixup with flights back to Brazil (the team insisted on using a Brazilian airline), and that meant that they stayed a couple of extra days in LA before returning home. They skipped out on the hotel bill for that part of their trip, and the local league had to cover it. So my father followed the rules of international soccer and filed a claim with the US Federation, which went through CONCACAF, and finally to FIFA. They never heard back on that issue, and eventually pretty much went on with business, not really thinking about it.

A few years later, the Brazilian national team was scheduled to play an exhibition in New York (I believe against the German national team). This was going to be a major match for soccer in the US. A few days ahead of the match, my father got a call at 4 AM on a Saturday morning from the Vice President of the US Soccer Federation.

“John (that’s my father- John Walker), I just got a call and we need to talk about the match between Brazil and Germany.”

“What? How does this have anything to do with me? I hope it’s a great match.”

“The Brazilian team is banned from play- the president just called me and demanded that we get this straightened out.”

“Is this about that club team? Well, they owe us money. Can we get that back?”

“John- the president called me. We need this to go away.”

“So tell Mark (I have no idea what the name of the president of the US Soccer Federation was, so I’m choosing Mark for this telling of the story) to call me and we’ll work it out. It’s 4 AM, let me get some sleep.”

“NO, JOHN- THE PRESIDENT CALLED ME. LYNDON JOHNSON JUST CALLED ME! WE NEED THIS TO GO AWAY!”

Apparently the president of Brazil called Lyndon Johnson when he found out that his national team was banned from the US, and then LBJ called the US Federation to let them know he wasn’t happy about it. The match went on without incident.

So my father was nearly the cause of an international incident. I like to think that this, and not Vietnam, is the reason why LBJ didn’t run for another term.

P.S. The local league never did get their money back.

P.P.S. This is told from memory of a story my father told me years ago about something that happened decades ago. I’m sure some of the details are incorrect.