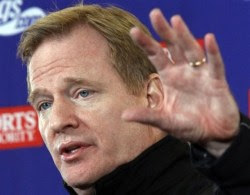 By saying that I don’t mean that football sucks, or that the games suck, I mean that the league and its policies suck. Especially Roger Goodell (pictured), the commissioner and executive in charge of screwing over the fans at every opportunity.

It’s 4 AM, and I just finished watching the replay of the Raider game, since thanks to Roger Goodell and the NFL, KTLA isn’t allowed to show the game live in Los Angeles. Why is that, you might ask? It’s because the Chargers have asserted “territorial rights” to the Los Angeles TV market, meaning that if they are playing, the Raider game has to be tape delayed. Never mind the fact that there is no local outlet that shows all Charger games, because NOBODY IN LA CARES ABOUT THE CHARGERS. That doesn’t matter to the NFL- they don’t care about the fans. Los Angeles has a long football history with the Rams and Raiders, and the biggest fan bases in LA County seem to be (in this order):

This is based on absolutely zero scientific evidence, just my own anecdotal observation. But I do observe these things closely.

Another one that sucks is that you can order for $40 the right to watch every NFL game online in HD…one day after it’s been played. Why the hell does anyone want to see games when they’re delayed by a full day? Why is it that there is no live online viewing option whatsoever in the USA and Mexico, when there is everywhere else in the world? If I lived in Beijing, Budapest, or Barcelona, I would have an easier time watching every Raider game this year than I do living in LA County. They have granted a monopoly to Direct TV, meaning that fans that want to see games either have to switch their entire TV service, or we’re shit out of luck.
Lastly, there has been some shady anti-consumer practices going on with the NFL and video games for years. In 1999, Sega Sports came out with NFL 2K, the first video game to really challenge the EA Sports Madden Series in terms of quality. By the time NFL 2K4 came out, it had surpassed Madden in gameplay, graphics, realism, fun, and just about every other measure you use for football video games. Then they really shook things up by pricing their game at just $19.99 new. This was when every new game was priced at $49.99. It forced EA Sports to lower the cost of Madden to $29.99 to compete. Sounds great for the consumer, right? So, what do EA Sports and the NFL do? Do they work harder to create a better product? No, they sign an exclusive deal with the NFL that no longer allows Sega to produce the NFL 2K series. So the next year there is no NFL 2K game, and the cost of Madden? It was back up to $49.99. Way to stick it to the consumer and all football fans, NFL. You suck.
Pete Rozelle sucked, Paul Tagliabue sucked, and now Roger Goodell sucks. It’s scumbag after scumbag in the commissioner’s office, and someday the government will revoke your anti-trust exemptions and force you to let consumers have a choice. It can’t come soon enough.
<
>